How to sell jewelry with Augmented Reality: 55% states that AR helps users with the right purchase

Blockchain and AR/VR — A match made in virtual heaven

The impact of Augmented Reality on Retail

While Virtual reality has grabbed many of the headlines in recent months, its lesser-remembered cousin Augmented Reality (AR) has been put to some interesting use in online retail.

With Invesprco estimating that around $2.4 trillion will be spent online next year, making up 8.8% of all retail spending, companies are right to be looking for an edge.

Here, we look at what AR is, how it can be used and who is using it well.

What is Augmented Reality?

A very simple place to start is with what AR actually is and how it is used.

Augmented Reality is a technology which superimposes a computer-generated image on a user’s view of the real world. In modern technology, it is most commonly implemented using a person’s phone camera.

Examples of it in use include Snapchat camera filters, FlightRadar24’s binoculars feature – which allows users point their camera at overhead planes and see flight information – and the wildly popular Pokemon Go game. 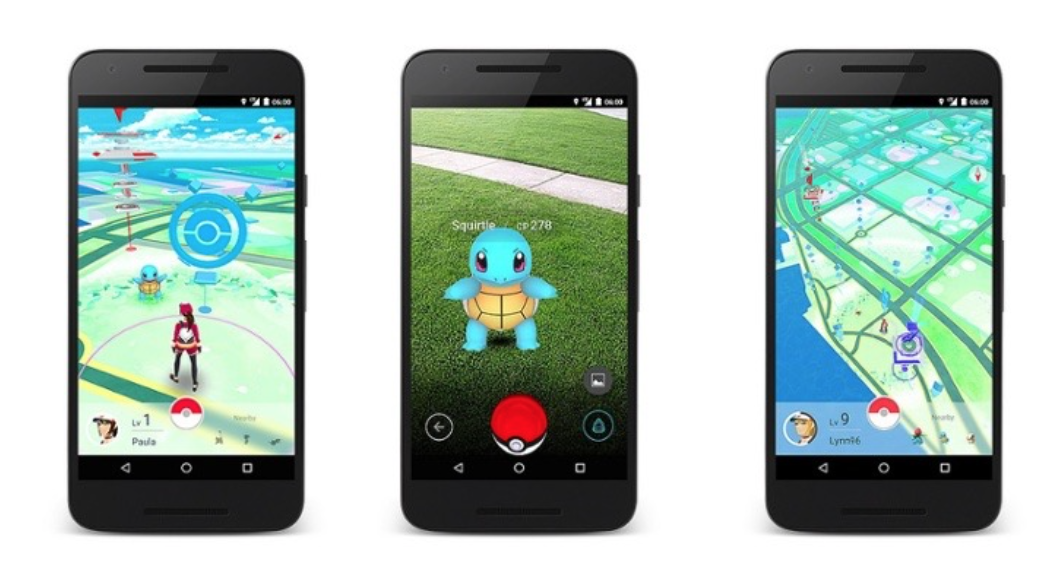 While AR has been around for quite some time, its uses in retail are still being implemented and refined.

How can it be used?

In theory, AR can be used in any situation where information can be overlaid on a live feed, making its potential uses widespread.

Writing on Techpinions last year, Tom Mainelli of IDC Devices explained why he was bullish on the technology.

“The potential impact of AR in business is staggering. At IDC, we’re currently building out our first forecast, but it is clear that in the long-term view there are potentially very few businesses that won’t be impacted by AR technology.“

He says that healthcare, design, manufacturing and services will see the mass rollout of AR in the coming years.

Imagine a situation where you rent both the equipment necessary to do a home improvement project as well as the AR equipment to gain access to an expert who walks you through the more complicated steps.

Mainelli adds that while he expects VR to maintain its grip on the headlines, AR offers better opportunities for business.

At some point, though, the opportunity around AR will become abundantly clear. It’s not a matter of whether AR will have a significant impact on business; it’s just a matter of exactly when.

Who is using it and how?

Mainelli’s point about about the pace of adoption is backed up by TechProResearch. It found that while many were aware of the technology, 61% of companies didn’t use AR at all. 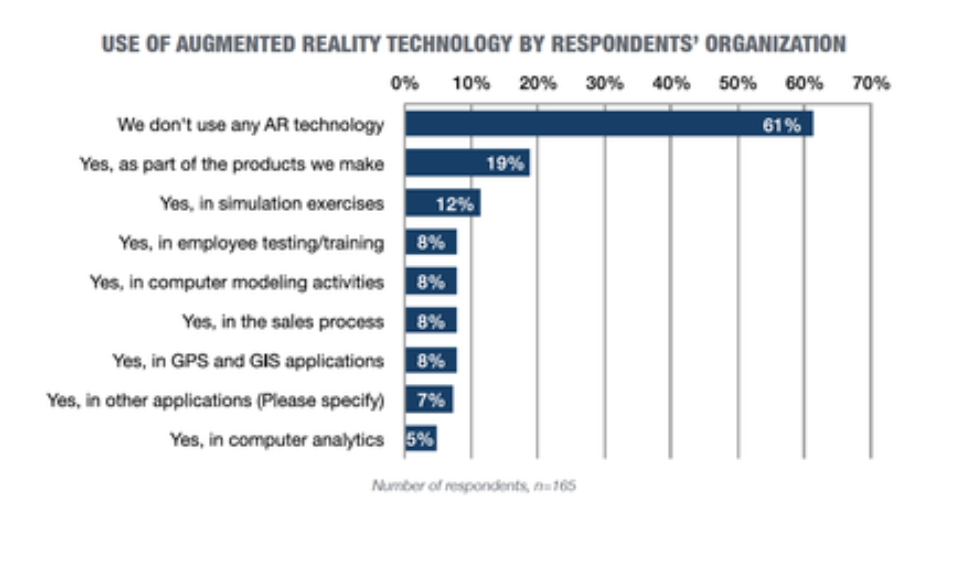 The research added that 20% of all respondents were not at all familiar with Augmented Reality.

However, AR wins the battle for future adoption with VR. The research finds that 20% of companies have plans to adopt AR in the next year, compared with 13% who are looking at VR.

That number goes to 10% for both in the next three years and 37% for AR and 25% for VR with regards to long-term adoption.

Mitchell Duncan of research tax credit specialists Jumpstart told The Virtual Report in September that the future is in AR, not VR.

People’s lives have become so hectic that using VR may represent a significant and unwelcome interruption. AR features no such interruption, instead allowing people to take in the world around them without ignoring it. Augmented Reality can also facilitate interaction with other people and with objects, leading inevitably to more and wider real-world applications for the technology.

Some of those real-world applications have already been implemented and are making a splash in retail, both brick and mortar and online.

In September, furniture giant Ikea made a major announcement about the use of AR. Using the technology of Apple’s iOS11 ARKit, Ikea announced Ikea Place.

The app allows users virtually place furniture in their rooms and see how it will match up with existing decoration.

The company, which had €35 billion in sales in 2016, said that the app marked “an important milestone in the IKEA digital transformation journey”.

Head of digital transformation at the company Michael Valdsgaard told CNN that the app could mark the future of the company. Known for its giant, cavernous warehouse stores, Place could see Ikea moving to smaller stores reliant on distribution centres.

“IKEA Place makes it easier to make buying decisions in your own place, to get inspired and try many different products, styles and colors in real-life settings with a swipe of your finger.

Augmented reality and virtual reality will be a total game changer for retail in the same way as the internet. Only this time, much faster.

Retailer American Apparel has been using an AR app for some years and their app shows the simple functionality that users can get from the technology.

Using the app, users can see how items can look in other colours, can match up as part of an outfit and can see reviews of individual items. Customers can also place orders or gift the items to friends.

Cosmetics brand Sephora got the jump on ARKit and has been using AR in its main app since earlier this year.

The app allows users see how products look on them before they buy. From there, they able to order the products or ask their friends which products are best. 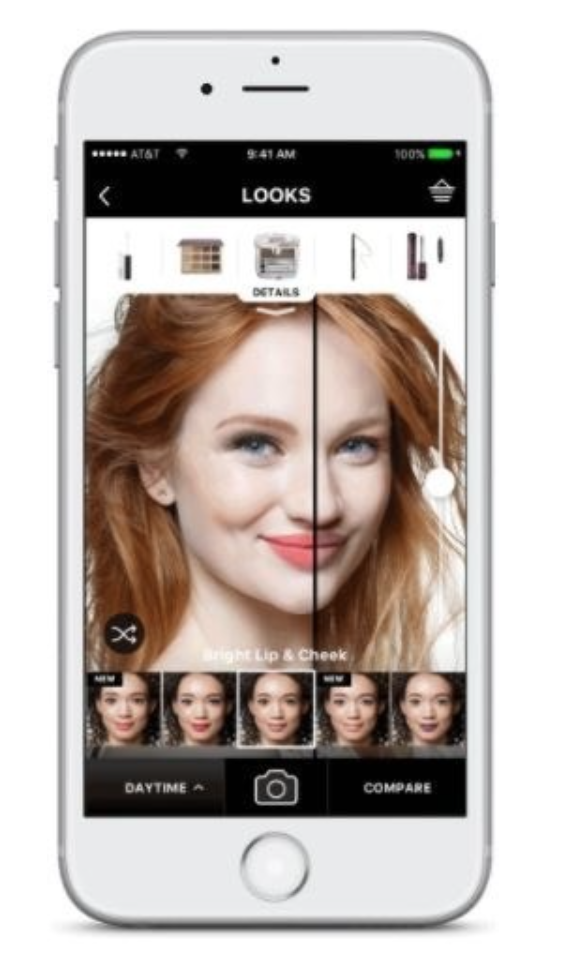 Making the purchase feel like a game is no accident, says Bridget Dolan, VP of Sephora’s Innovation Lab, in a press release.

“With Sephora Virtual Artist, our clients can have friends vote on which shades looks best on them from wherever they are. We want to make buying lipstick more fun than ever, and maybe a little addictive.”

Paint company Dulux has attempted to solve an age-old problem with its app – that of paint tester pots.

Its Visualiser app allows users point their cameras at a wall and see how individual colours will look on their walls. The app reads wall edges and puts whatever colour a user desires on the wall.

Again, the company has a built-in function to order paint, with AR’s immediacy seen as a nudge to encourage sales.

Of course, not all examples of AR in retail are limited to apps. In the early days of AR, TopShop designed an augmented dressing room.

Using Microsoft’s Kinect technology, the company was able to show customers how clothes looked on them without the customers ever having to get changed.

With 2.4 billion smartphone users in the world, according to Mobile Marketing Magazine, it is easy to see why businesses are trying incorporate the phone into retail.

However, the statistics go beyond just proliferation of phones.

Statistics from Retail Perceptions show that 61% of shoppers prefer stores which offer augmented reality experiences, 71% would return more often and 40% would pay more for a product if they could experience it in AR. 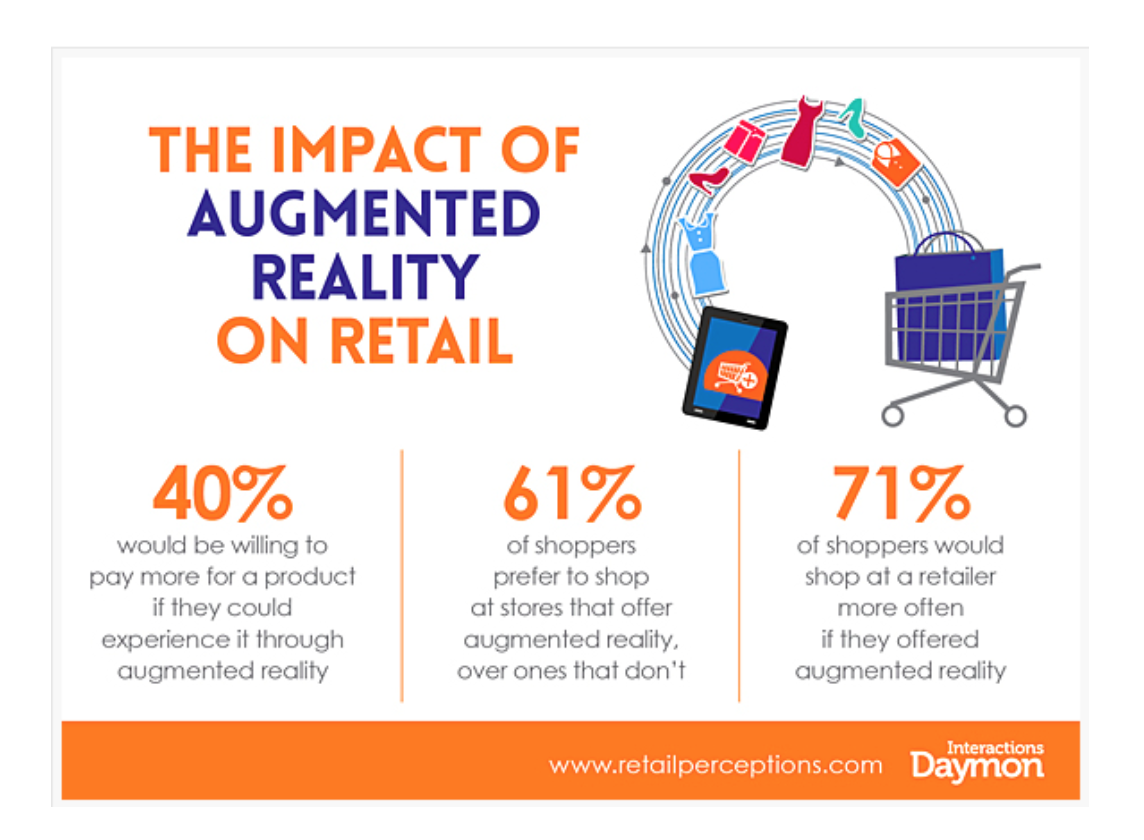 Evan Varsamis of Gadget Flow says that time on page is two to three times longer for AR customers than those who do not use it.

This shows that AR can increase sales, spend and consumer loyalty.

From a user point of view, AR allows for pre-purchase testing of products and makes the purchase process feels more hands-on.

This creates tailored, individual purchases for all customers.

Online retail opportunities continue to expand as more consumers begin their purchasing decisions through online portals. To remain competitive and profitable, it is no longer enough just to have an online presence. Your online shopping experience must now be personal and interactive to help ease buyer uncertainty and drive profit through consumer satisfaction.

With all of this in mind, and remembering the size of the companies already on board, it is hard to not see AR making a major impact on the retail space in the next three to five years.

Vertex VR is in forefront of developing AR apps for retail businesses. Contact us to schedule a demo info@vertexvr.nl